A white woman in rural Michigan has shared how she was pulled over five times in the space of a year because her large black poodle was repeatedly mistaken for an African American man.

Award-winning playwright and children’s television writer Cynthia Franks says she noticed the different treatment by law enforcement when she moved back to her hometown after living in New York City for fifteen years.

In a blog published June 1, titled A White Woman, Racism and a Poodle, Franks explains how in at least three traffic stops for offenses such as impeding traffic when there were no other cars on the road, officers were quick to reach for their gun holster.

Franks said prior to her time in New York she only got pulled over three times in 15 years, twice for speeding and once for an illegal left turn. But every time she got stopped with her pooch Merlin in the passenger seat, she never received a ticket and was left confused. 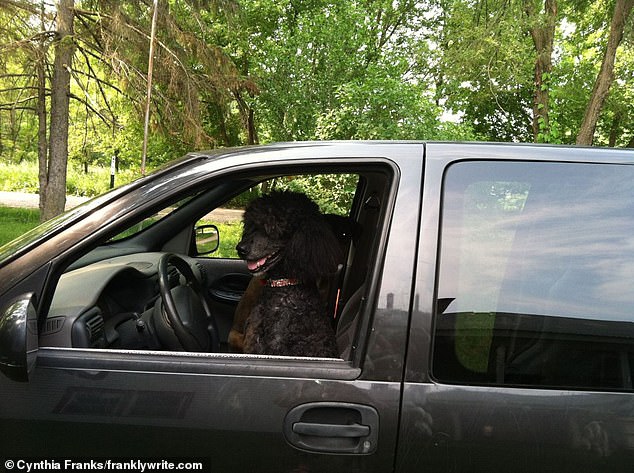 Cynthia Franks has written about how her dog Merlin was repeatedly mistaken for a black man, causing her to get pulled over by police but never getting a ticket. She only realized when an old neighbor said a black man was behind the wheel of her car and was about to steal it 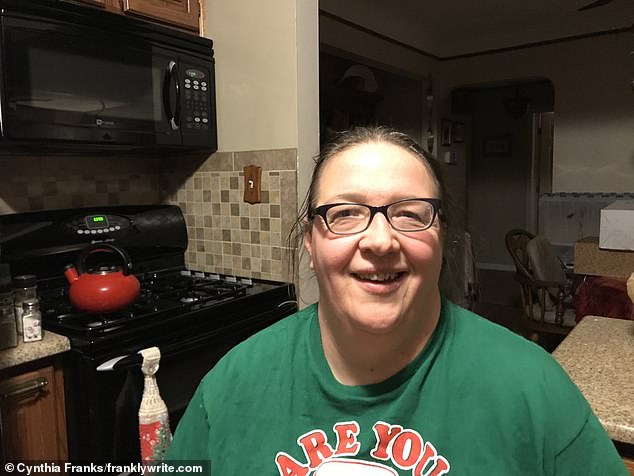 Cynthia Franks says in three out of five incidents in one year, police in rural Michigan reached for their gun holster. She says they seemed annoyed that it turned out to be a dog in her van

In the first incident Franks was driving down Dixie Highway at the speed limit of 50 mph when she got stopped and a Monroe County Sheriff unfastened the top of the holster of his gun.

‘He looked in the window and flashed his light on Merlin and his demeanor changed. The stern look on his face disappeared, but he seemed… annoyed,’ Franklin writes.

‘I thought I was going to get a ticket for Merlin being in the front seat. He didn’t ask if I’d been drinking or had any weapons.’

Franks says he checked her license told her she was going 3 miles under the speed limit and was impeding traffic, and let her off. ‘There were no other cars on the road,’ Franks wrote.

But Franks describes the second time she got pulled over as the ‘oddest one’.

This time she was in Huron Township and Merlin was in the back seat.

‘The officer seemed annoyed as he said, “Is that a Poodle?” I said yes and put Merlin back in the van. The officer seemed mad as he explained impeding traffic law, like I tricked him somehow and was wasting his time.’

After that point she began to question whether the speedometer on her dark grey, 1998 Chevy Venture van – which she describes as ‘in good shape’ – was broken. 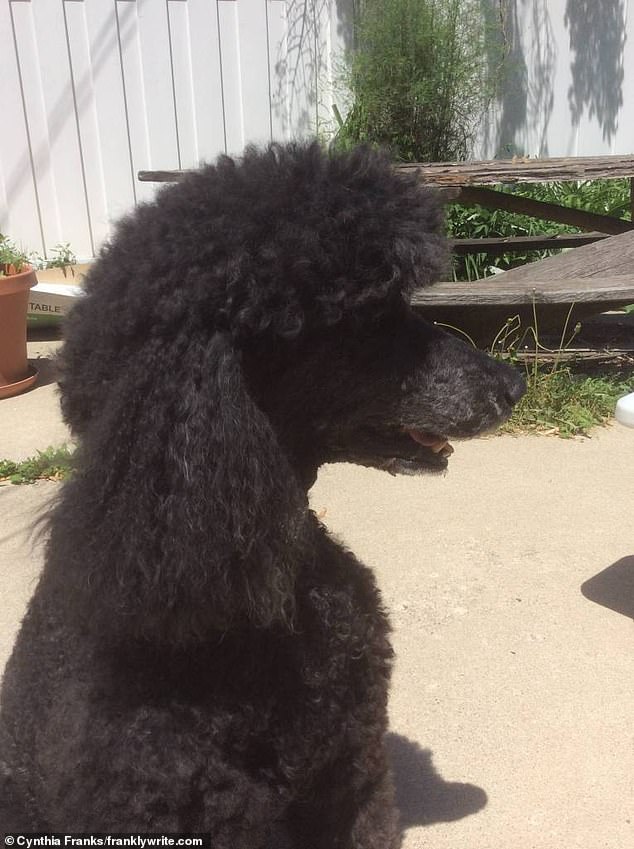 In hindsight, she feels she should have known her dog was being targeted because ‘there were plenty of times black men pulled up next to me when Merlin was in the passenger seat and said, “Hey, a brother dog”‘

Franks describes the ‘scariest’ time as another incident where two Huron Township cars followed her for half a mile before turning on its lights. As she headed home from her sister’s house after 10pm she checked her speedometer to confirm she was driving at the speed limit but still got stopped.

‘One cop walked up on the passenger side of my van. I saw him in the sideview mirror unholstering his gun as he sidled up to the window where Merlin was sitting.

‘I rolled down my window and was asked to roll down the passenger window… He asked me if I’d been drinking and if I had any weapons… He took my license and examined it with his flashlight. He handed it back and asked where I was going. ..The whole time the other cop is still standing on the passenger side with his hand on his holstered gun,’ Franks writes.

‘The first officer explained I was driving erratically and going 5 miles under the speed limit and went through the impeding traffic law as if I was five years old. I didn’t get a ticket.’

Franks said the experiences were ‘puzzling’ and ‘irritating’ but she still only thought she was being ‘punished for driving an old van’ until one day someone assumed a black man was stealing her vehicle.

Franks says she was having breakfast with her father at a restaurant when an old neighbor came in and told her: ‘There’s a black man stealing your van. He’s behind the wheel right now.’

‘I paused a minute and realized he was referring to Merlin. Bells went off,’ Franks wrote. 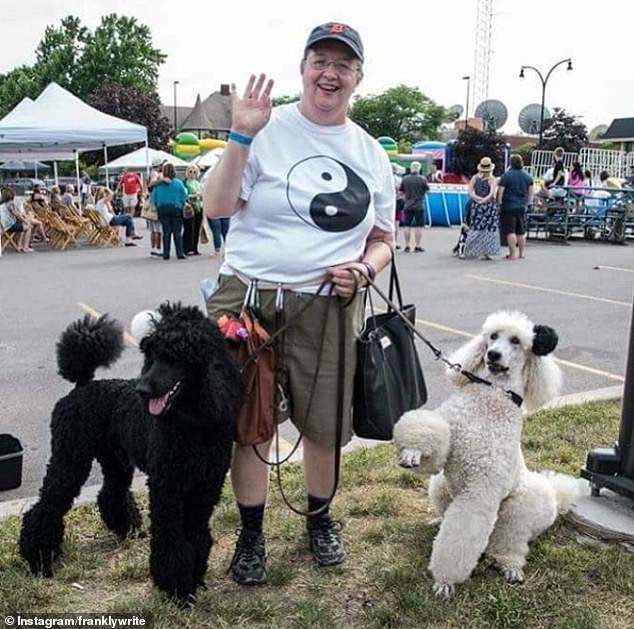 Franks wrote: ‘I cannot imagine having it happen several times a week my entire life. As a white woman, getting stopped by the police is scary; it makes my heart race and my stomach hurt,’ Franks wrote.’I’m sure a black person’s fear and rage is a hundred times greater’

‘I was furious… I wasn’t impeding traffic, it’s not my van, it’s not my driving–they thought Merlin was a black man!

‘That’s why I kept getting pulled over.’

Franks says she felt ‘angry’ when she realized her dog was a victim of racial profiling.

In hindsight she feels she should have known her dog was being targeted because ‘there were plenty of times black men pulled up next to me when Merlin was in the passenger seat and said, ‘Hey, a brother dog.’

She also references John Steinbeck book Travels with Charley in which the man got in trouble a few times because people thought the dog Charley was a black man.

‘How could I be so stupid!’ Franks wrote.

‘This happened to me 5 times in the span of about a year. I cannot imagine having it happen several times a week my entire life. As a white woman, getting stopped by the police is scary; it makes my heart race and my stomach hurt,’ Franks wrote.’I’m sure a black person’s fear and rage is a hundred times greater.’

Franks says that since Merlin died, she hasn’t been pulled over once.

Her blog has received great feedback from friends, family and neighbors. Franks believes people who were not willing to accept the Black Lives Matter movement have become more open-minded since hearing about the dog. 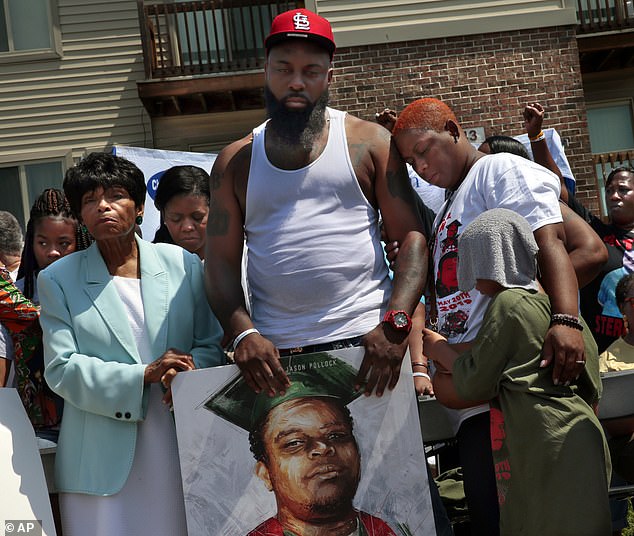 Franks said in reference to protests over the police killing of Michael Brown in 2014: ‘This experience made me see the issue very differently when the situation in Ferguson occurred’

‘A sea change has occurred in America and the Black Lives Matter movement is at the crest of the wave. This experience made me see the issue very differently when the situation in Ferguson occurred. I had an understanding of the rage I didn’t before,’ Franks admitted to DailyMail.com on Thursday. ‘There are white people who know this occurs daily and don’t know what to do; Black Lives Matter can help them.

‘There are also white people that did not get it and they read this and have an A-hah moment. Since this story is about a dog and not person, I think people find it easier to talk about. It’s funny, people of color get it as soon as they see the photo of Merlin sitting the van. White people are surprised by the ending like I was.’

‘Before I wrote the post I decided to work on an idea I got from reading the book Evicted: Poverty and Profit in the American City, by Matthew Desmond. He brings to life the cycle of eviction that keeps a lot of people, many black Americans, in poverty,’ Franks told DailyMail.com.

‘He has several ideas to change. The first and simplest is to assign an attorney to every person who goes to housing court. This would enforce the laws already on the books to protect tenants and force landlords to comply with regulations.

‘It could have a profound effect on people’s lives fairly quickly. I’ve never tried to create a law before, but I’m going to give it a go.’